“It is imperative that we build public consensus and promote private investment on hydrogen.” As we approach the dawn of the hydrogen age, countries across the world are vying to take the lead in the hydrogen economy. As one of the competitors, South Korea is also ramping up its efforts in both public and private sectors to emerge as a leader in the new world.

In response, the Future Consensus Institute (Yeosijae) partnered with the Institute of Korea Energy Policy for the Future (IKEP) to host the Hydrogen Seminar on 29th at the Korea Press Center to discuss ways for South Korea to ensure global competitiveness in the hydrogen world.

During the seminar, Deputy Minister Young-Joon Joo introduced the South Korean government’s policies for the promotion of hydrogen economy and highlighted that the allocations for hydrogen economy in 2021 currently stands at 241.1 billion won for MOTIE, including the budget for the proposed Green New Deal, and that it would reach roughly 797.7 billion won if the numbers include funding for related agencies. Hydrogen and fuel cell R&D appropriations have been expanded for the next year by 50% compared to 2020, to the amount of 122.73 billion won. Moreover, the government has set the goals to produce 6.2 million hydrogen cars, build 1,200 hydrogen fueling stations, distribute 15-gigawatt fuel cells, and supply 5.26 million tons of hydrogen by the year 2040 to establish South Korea as the market leader of hydrogen cars and fuel cells and emerge as a hydrogen powerhouse in the hydrogen era.

Professor Seong-Kyung Cho underscored the importance of public communication and emphasized that the government should actively engage with the public to promote hydrogen infrastructure development in South Korea.

The highlights of the discussions from the Hydrogen Seminar are summarized below.

Following the announcement of the Hydrogen Economy Standards Strategy & Roadmap in April 2019, the South Korean government ramped up its efforts to accelerate the transition into the hydrogen economy by introducing the Development Strategy for the Future Vehicle Industry, Hydrogen Infrastructure and Charging Unit Development Plans, and other subsequent measures. It has also established the Green Hydrogen Overseas Project Group in June and the Hydrogen Economy Committee in July of 2020 to uphold its commitment to bring government departments together from the early stages of the transition. In February, South Korea introduced the world’s first Hydrogen Economy Promotion and Safety Control Act and has since designated Ulsan, Ansan, Wanju, and Jeonju as Hydrogen Pilot Cities. 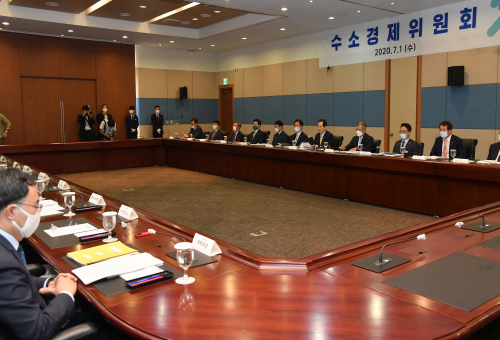 The Hydrogen Economy Committee that was launched on June 1st (Source: Office for Government Policy Coordination)

On the production side, the government plans to develop a 10MW~100MW electrolysis system through pan-governmental technological development programs to achieve the goals of the Green Hydrogen Project and is currently conducting preliminary feasibility studies to do so. On the distribution side, it is reviewing plans that include the distribution of liquid hydrogen and refueling stations in urban settings and the introduction of a green hydrogen certification system.

Unlike the traditional method of electricity generation, which uses turbines to generate power, fuel cells generate electricity through electrochemical reactions from electricity, heat, and water.

The benefits of hydrogen fuel cells, which vary in power output and usage depending on their electrolyte substance, is that they produce little to no air pollution and that they do not place burdens on electric transmission and distribution facilities since they can be built near urban areas. Moreover, fuel cells possess energy efficiency that surpasses that of renewables, and since they demand smaller parcels of land, they are easier to cite than others.

Since the construction of a (now-closed) fuel cell park in Bundang by FuelCell Energy (FCE) in October 2006, Korea South-East Power Co. (KOEN) has been operating fuel cell units in Ansan, Hwasung, and Yeosu.

With the prospect of the South Korean government implementing the HPS system, KOEN plans to build additional fuel cell power capacity in Wangam (North Chungcheong) and Moro (Haman, South Gyeongsang). Director Gang-Uk Bae said, “the fuel cell industry was a profitable business until last year, but falling oil prices have created uncertainty in the market this year.” He added, “We need the government to support the industry, with price stabilization measures and others alike, to expand the market.” Despite the government’s ambitious plans, experts agreed that it would take a considerable time for the hydrogen economy to take off and advised that the government carry out its plans with a long-term vision instead of being swayed by immediate results. Professor Seong-Kyung Cho said, “When we discuss the hydrogen economy, we are talking about things that will occur not today, but in the future. In other words, the government is engaged in a long-term project, and thus, we must make sure that the foundations are strong. Government subsidies alone cannot carry us through the long process, so we have to encourage private investment in hydrogen.”

On this note, Executive Director Sung-Hoon Kim commented, “the road to the hydrogen economy is a road we must travel,” but he also pointed out that hydrogen faces three dilemmas as to its use as a new source of energy. The first issue at hand is the balance between green and grey hydrogen. To generate electricity from hydrogen, we must first produce hydrogen. However, due to the limitations of current technologies, the predominant source of hydrogen is fossil fuels. This means that the most used form of hydrogen energy is grey hydrogen. The second problem is the lack of technologies related to hydrogen production and equipment and facilities. And last but not least, we face a dilemma in that there is a question of how we will build a system in a timely manner to make supplies of hydrogen available on demand.

The participants also pointed out that hydrogen is just one of the various energy sources of the future and emphasized that the government should develop policies that align with our reality and goals instead of pursuing pre-fixed models of the hydrogen economy. Professor Cho said, “Technological cooperation with other countries through sharing of information and joint research is what is important right now.” She continued, “No model of hydrogen economy can work as a silver bullet for every country. Consequently, we need to start considering what model of the hydrogen economy would best suit South Korea.” Furthermore, Professor Cho mentioned that we should also focus on the ammonia industry, considering that ammonia is used to store and transport hydrogen.

Another obstacle that stands in the way of the hydrogen economy is whether residents will embrace hydrogen as an energy source. A case in point to highlight would be KOEN’s project for solid fuel power plants. KOEN’s plans fell through in 2013 due to resistance from the residents of Hwasung, Gyeonggi.

Professor Cho said, “According to a survey from June, 66.8% of the 1,000 respondents agreed that there is a need to expand hydrogen infrastructure. However, only 52.6% and 42.8% agreed to the construction of charging stations and fuel cell plants in their neighborhoods, respectively.” She continued, “People in the past accepted risks if they were given corresponding benefits. However, that no longer applies today.” Professor Cho stressed that “a large part of the resistance comes not from safety concerns, but from the fact that people feel the government has not informed them of these projects in advance,” and added that we should look into this matter. “Having the public engage with only the construction companies or contractors would make it difficult to increase public acceptance of government projects. This issue, however,” she said, “can be surprisingly easy to solve if the government decides to step up and lead the discussion.”

This text was originally published on Yeosijae's Korean homepage on November 2nd, 2020.