2020 Diagnosing North Korea: The Future of the Korean Peninsula by International Journalists On October 10th, North Korea held a military parade to celebrate the 75th anniversary of the ruling communist party. The highlight of the night that garnered the most attention was Chairman Kim Jong-Un’s public display of tears. In a rare moment of emotion, Chairman Kim began to tear up as he delivered an emotional speech to express his gratitude and offer apologies to his military and his people for their hardships caused by the recent floods and the COVID-19 pandemic. Kim’s dramatic performance that portrayed him as someone who “loves his people” and his show of power with the display of a new intercontinental ballistic missile (ICBM) have led to multiple interpretations of Kim Jong-Un’s brand of politics. What does Kim want to achieve with these mixed messages? The answer, according to many experts, is that the North hopes to rally its people around its leadership and strengthen Kim’s power amid the triple whammy of crises.

After holding an expert panel discussion in August to discuss the economic conditions of North Korea, Yeosijae met with global journalists on September 29th to analyze Pyongyang’s recent movements.

During the webinar, the participants offered their interpretations of North Korea’s recent actions. Their observations were similar, in that they were part of the effort to strengthen Kim’s rule and boost internal unity. Jiro Ishimaru, who heads the Osaka office of Asia Press, referred to the National Intelligence Services report that claimed that Kim has delegated partial authority to his sister, and said, “rather than a delegation of power, I believe this gesture was an effort to strengthen the monolithic dictatorship of the Kim family.” Regarding Pyongyang’s decision to blow up the joint liaison office in June and ignore South Korea’s proposals for inter-Korean cooperation in the healthcare sector, he assessed that they had been a part of the “anti-South Korea” campaign that the North used to bolster internal unity and strengthen Kim’s power.

The two-hour session featured experts from South Korea, Japan, U.S., and New Zealand. Through this occasion, Yeosijae spoke with Jiro Ishimaru (Head of the Osaka Office, Asia Press), Anna Fifield (Editor of the Dominion Post, former Beijing bureau chief for The Washington Post), Chad O’Carrol (Founder and CEO, NK News), and Won-Ki Choi (Senior Editor, Voice of America) to discuss North Korea’s recent movements in the context of the recent changes that have occurred in regional and international geopolitics. The session was chaired by Yeosijae’s Research Associate and a former diplomatic correspondent for YTN, Son-Taek Wang. 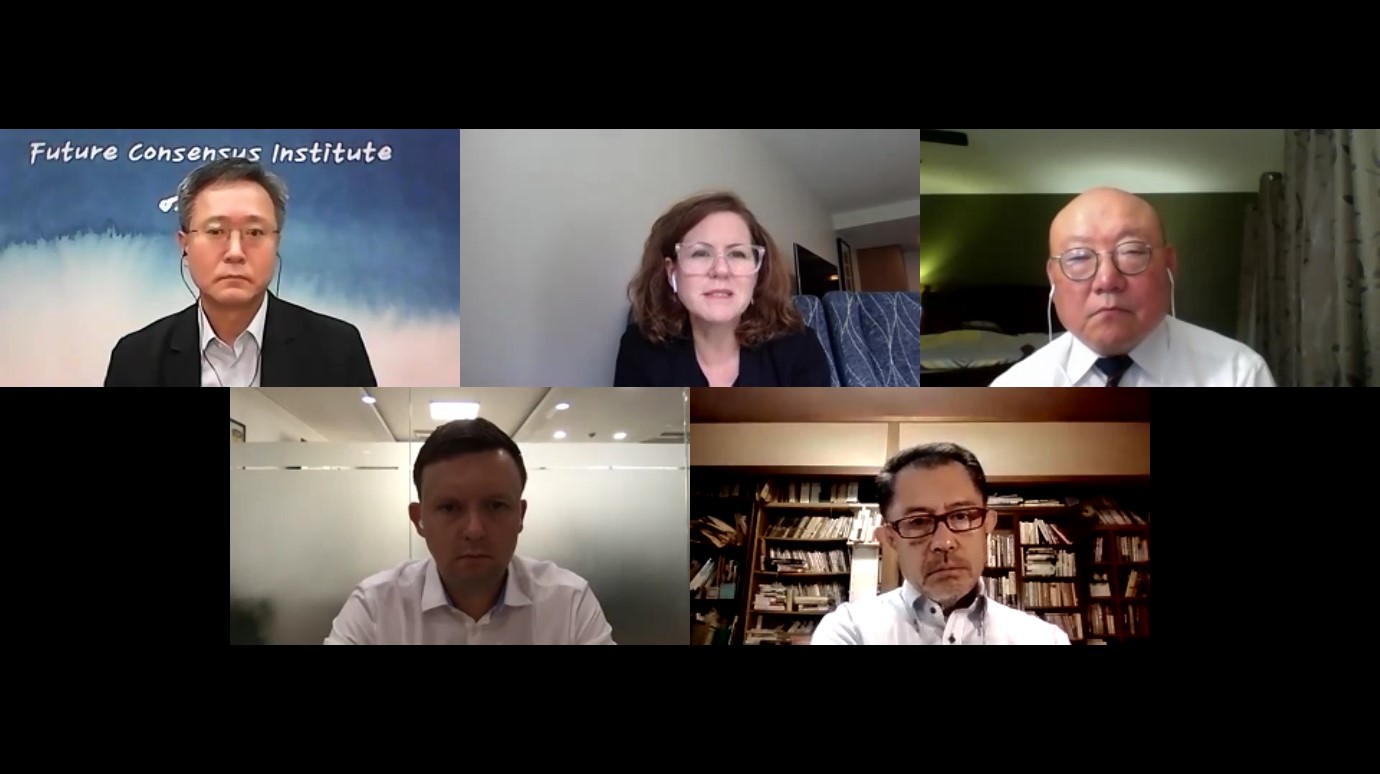 The Rise of Kim Yo-Jong: Strengthening the Monolithic Dictatorship of the Kim Family

Having analyzed the changes and recent developments in North Korea, Mr. Ishimaru drew attention to the rise of Kim Yo-Jong, First Vice Department Director of the Central Committee of the Workers’ Party of Korea. He pointed out that her increased presence on the political stage should be considered not as a “delegation of power by Kim Jong-Un,” but rather a measure to “strengthen the monolithic dictatorship of the Kim family.”

He illustrated that Kim Yo-Jong’s rise to power was not a sudden occurrence, but a gradual transition that has occurred over the years through deliberate series of actions intended to “showcase that Kim Yo-Jong is a member of the royal family.” After the reins of the country were passed to Kim Jong-Un, the regime proceeded to revise the “Ten Principles for the Establishment of a Monolithic Ideological System” in 2013 to include a phrase that state “North Korea and the Workers Party will be kept alive forever by the Baekdu bloodline.” Pointing this out, Mr. Ishimaru assessed that Kim Yo-Jong’s new role in politics is a part of the regime’s plan to strengthen the system of hereditary rule and maintain the purity of the Kim bloodline. In other words, Kim’s push to elevate his sister’s status is a means to an end, to stabilize the hereditary system of rule in the absence of a clear successor.

Mr. Ishimaru also evaluated that Kim Jong-Un’s decision to delegate part of his authority to his close aides as an effort to help the leader oversee state affairs, and added that they are yet to find any sign of change amongst the inner circles of North Korea.

During the session, the participants agreed that the fatal shooting of a South Korean official in September likely occurred due to North Korea’s strict anti-coronavirus measures. According to Mr. Ishimaru, internal documents have been found in North Korea with assertions that claim “South Korea is trying to spread the coronavirus into the North,” and that “North Koreans should burn everything that crosses the border from China and the DMZ to prevent the spread of the virus.” NK News CEO Chad O’Carroll also agreed that it did not look like a “planned killing” and that it appears to have happened because “local military officials autonomously decided to follow COVID-related instructions.” Yeosijae’s Research Associate Son-Taek Wang referred to an incident that took place in July, where a defector swam across the western inter-Korean border to return to North Korea. The man caused an uproar that put Kaesong into a lockdown, and officials were held accountable with disciplinary measures for the incident. He said this event could have provided a reason for North Korean officials to respond more aggressively when they encountered the South Korean official in September.

As for the rare apology from the North Korean leader, the participants had different views on what prompted the gesture. Mr. O’Carroll said, “increasingly under Kim Jong-Un, North Korea is transparent about failure when the evidence is clear.” He speculated that “there may be a video from intelligence assets, recordings of sounds collected remotely” that made it “natural for Kim to apologize promptly.” Mr. Ishimaru, on the other hand, suggested that the apology may have been made to mark a turning point in North Korea’s foreign policy and move away from the anti-South Korean sentiment that has been used to strengthen internal unity amid the triple whammy of crises in 2020. He pointed out that North Korea has to improve its relationship with the U.S. to overcome the economic challenges that it faces and that it needs South Korea’s assistance to make things happen. He assessed that the North had started to shift its position in September when Chairman Kim exchanged letters with the South Korean president and that the shooting, therefore, was an accident that was unintentionally caused by North Korea. Consequently, he believed that Chairman Kim moved to offer prompt apologies to South Korea for the incident, in fear that it could sour the inter-Korean and U.S.-DPRK relations.

In contrast, Senior Editor Won-Ki Choi explained the reasons behind the rare apology by linking it to the U.S. presidential elections. He agreed with Mr. Ishimaru in that North Korea is suffering from economic difficulties and is hoping to change gears. Mr. Choi stated, however, that against this backdrop, Kim’s gesture could indicate that Pyongyang has been preparing for an “October surprise” to initiate talks with the U.S. before the presidential elections in November. “Returning to the table without resolving standing issues would have put considerable pressure on the North,” he said. He believed that this was why the regime offered a prompt apology to South Korea.

North Korea and the US-China Conflict: Maintaining the Status Quo and Learning from Vietnam

The participants also share their thoughts on North Korea in relation to the escalating U.S-China tensions and the rapidly changing situations in the Korean Peninsula. Anna Fifield, the Editor of the Dominion Post, said China is too occupied with issues on all fronts “to be worrying about North Korea” and predicted that China-DPRK relations would continue to maintain the status quo for the time being. She explained that for five years after Kim Jong-Un rose to power, China and North Korea chose to mutually ignore each other by engaging only in trade and not in diplomacy. However, this changed in 2018, when China started to intervene in North Korea. She said that a big part of Xi Jinping’s motivation to involve himself in the situation was because of Donald Trump and his unpredictability. “Prospects of war or military action on the Korean peninsula forced China to take steps that it never had before… to show the U.S. that deterrence and sanctions could work and that there is no need to use military actions,” she said.

“When 2019 (Hanoi Summit) happened, and the talks ground to a halt, China was able to revert to their previous position of diplomatically ignoring Korea.” Ms. Fifield said, with escalating tensions with the U.S., China has “no incentive” to actively support U.S.-North Korea engagement. She continued, “This is why, when I look to the next six to twelve months on the North Korean situation, I think that they (China) would try to keep the status quo while all sides get through this difficult period.”

Mr. Choi said, now that North Korea has dodged a bullet thanks to the U.S.-China tensions preventing the two countries from cooperating to put pressure on the regime to denuclearize the country, North Korea should learn from Vietnam on how to manage the delicate balances between the two powers to tilt the situation in its favor. Like North Korea, Vietnam shares its borders with China and has fought wars against the U.S. Unlike North Korea, however, Vietnam has managed to balance the scales between the two powers, even without nuclear programs, to enhance their security and achieve economic prosperity. He said, “Kim Jong-Un has no term limits. This means that he cannot simply ride out the sanctions until his term is over. Considering these factors, I believe there are many things that North Korea can learn from Vietnam’s example.” He suggested that Kim use diplomacy to balance relations with China and the U.S. if he wants to bolster national security and economic prosperity.

A Military Parade with a New ICBM: North Korea’s Contradictions

On October 10th, just a few days after the webinar, North Korea held a military parade to celebrate the 75th anniversary of the country’s ruling party. The star of the rare night-time parade was a new intercontinental ballistic missile that was unveiled that evening as promised by the regime in January. Mr. Choi, who has conducted further analysis of the event, commented that it seems like Kim Jong-Un is “on a knife-edge” and pointed out the dilemma that Chairman Kim faces regarding the country’s nuclear program. He said, “While the new ICBM is a weapon that ‘cannot be used’ to wage wars with other countries, it is, at the same time, the ‘only accomplishment’ that Chairman Kim has made over the past nine years. In other words, his only card to play on the negotiation table is this weapon that has no usage. But with the U.S. taking an unaccommodating approach to North Korea, there should now be some sense of awareness within Pyongyang’s inner circles about how reckless nuclear development programs are and what consequences they entail.” He added, “Kim may have shed tears while speaking about the triple whammy of crises the North faces, but he was all smiles when they presented the new missile. I believe the parade was an event that laid bare the contradictions and problems of North Korea.”

This text was originally published on Yeosijae's Korean homepage on October 19th, 2020.