Yeosijae partnered with Chatham House, the Royal Institute of International Affairs, to conduct a webinar on July 14th to explore the topic of “Responding to COVID-19: Lessons from South Korea and the UK”. The session was chaired by John Nilsson-Wright (Korea Foundation Korea Fellow, Asia-Pacific Programme, Chatham House), and the panelists were: Young-Bae Kim (Member of the National Assembly, Democratic Party), Jung-Hun Cho (Member of the National Assembly, Transition Korea), The Rt. Hon. The Lord Lansley CBE (former Health Secretary and Leader of the House of Commons), and The Baroness Brinton (former President of the Liberal Democrats and Spokesperson for Health in the Lords). Parliamentarians from South Korea and the UK shared their countries’ respective responses to the COVID-19 crisis and discussed the role of governments in times of crisis like the COVID-19 pandemic.

Comparing COVID-19 Responses between South Korea and the UK

Rep. Cho said, “It is too early for any of us to claim victory over the COVID-19 virus.” With the virus still running rampant throughout the world, it is difficult to determine the “winners” and “losers” of the pandemic at this point, but the UK parliamentarians expressed that the UK experienced confusion as they were unable to respond to the pandemic in the way Korea has done. Lord Lansley mentioned the UK government’s reliance on past experiences in decision-making processes and said “the British government started with a pandemic plan based on influenza” and failed to recognize the differences that the novel coronavirus showed, causing critical delays in the initial response to the virus.

Rep. Cho described South Korea’s response to COVID-19 with the “R.O.C.”—resilience, openness, and comprehensiveness. He said these three principles guided Korea’s efficient response to the pandemic, by enabling active revisions of its protocols and policies, building trust in the government through transparent disclosure of information including the number of confirmed cases, and preventing weak links in the chain by implementing comprehensive policies. Citing their comparison of the pandemic responses between South Korea and the UK, both parties agreed that prompt, flexible responses are critical in times of uncertainty like the crisis.

The participants shared a consensus that striking a balance in the role of central and local government is another key to a successful crisis response. Lord Lansley said, “While central decision-making is necessary, decentralized delivery is equally necessary,” to which Rep. Kim agreed by emphasizing the role of local governments in developing creative disease control measures. He said, “For example, we had a drive-through testing facility created, and that idea came from a local government. We also created a care center so patients who were infected and tested positive but did not have very serious symptoms were put into these housing facilities so that hospital beds could be reserved for more serious patients … These were examples of the local government taking the initiative and thinking out of the box.” He added, “What is important is that everyone, whether it is the central government, local government, or citizens, feels that they are in charge.” He said we must foster relationships between stakeholders and motivate people to take charge to find solutions on the field.

The Importance of Public Participation

Rep. Kim also underscored the importance of public participation in COVID-19 responses. He then shared a recently conducted survey in Korea, where 80 percent of the respondents said they wear masks “to be considerate of others to protect others from catching the disease rather than to protect themselves.” He added that the rapid spread of the coronavirus in specific regions of Korea (e.g., Daegu) nearly collapsed the local health system, but was saved by the strenuous efforts from medical workers and volunteers. “The public was kept updated through the whole process, and this allowed them to support the frontline workers and empathize with them. I think that allowed people to fill the gaps in a moment of crisis where the national and the local government resources were overloaded, and participate in life-saving efforts.” He said, “I think that was an experience that united our people to provide motivations and foster public participation.”

Rep. Cho pointed out that a “one-size-fits-all approach will be unable to adequately balance government and privacy in every context,” and added, “each country should develop measures that take into consideration its history and tradition.” He said, “While it is fortunate that the Korea Center for Disease Control & Prevention (KCDC) has yet to report any misuse of private information, Koreans are quickly becoming sensitive to privacy-related issues, and for this reason, we need to discuss how we will balance privacy with disease control measures.” Lastly, he commented that it would be difficult to impose international standards on privacy for all nations, but still called on the WHO to present an international guideline for the collection and management of personal information concerning disease controls.

Both parties also agreed that international cooperation would be the key to vaccine provision in the future. Baroness Brinton said, “This is a global pandemic, and we need to work globally” and highlighted the need to ensure global access to vaccines. She also expressed her concerns that the United States may decide to “go at it alone” and hoped that discussions would take into consideration “countries that cannot afford to invest in the vaccine.” Lord Lansley said that vaccination is especially crucial for the vulnerable and older population, and that we need to prioritize who gets access to vaccines. He stressed that we have to maximize our manufacturing capacity to provide vaccines to the general population and especially for those who need them the most.

This session marked the second joint seminar between Yeosijae and the Chatham House, following the previous seminar held on May 29th on the topic of “COVID-19 and the World Order”. Yeosijae will continue to work with our partners to prepare for the New Normal world. 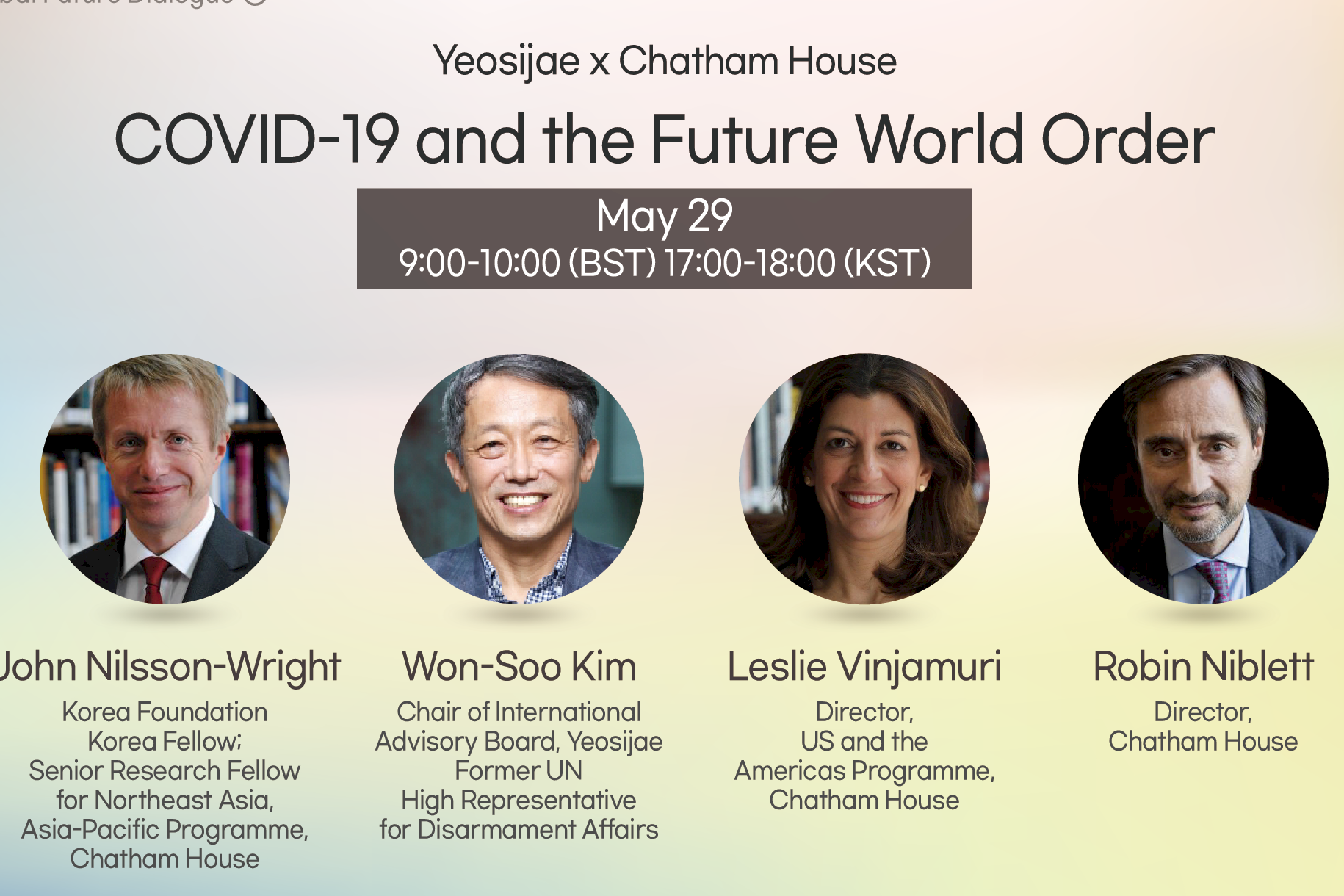