Discussing COVID-19 and the Future of Korea 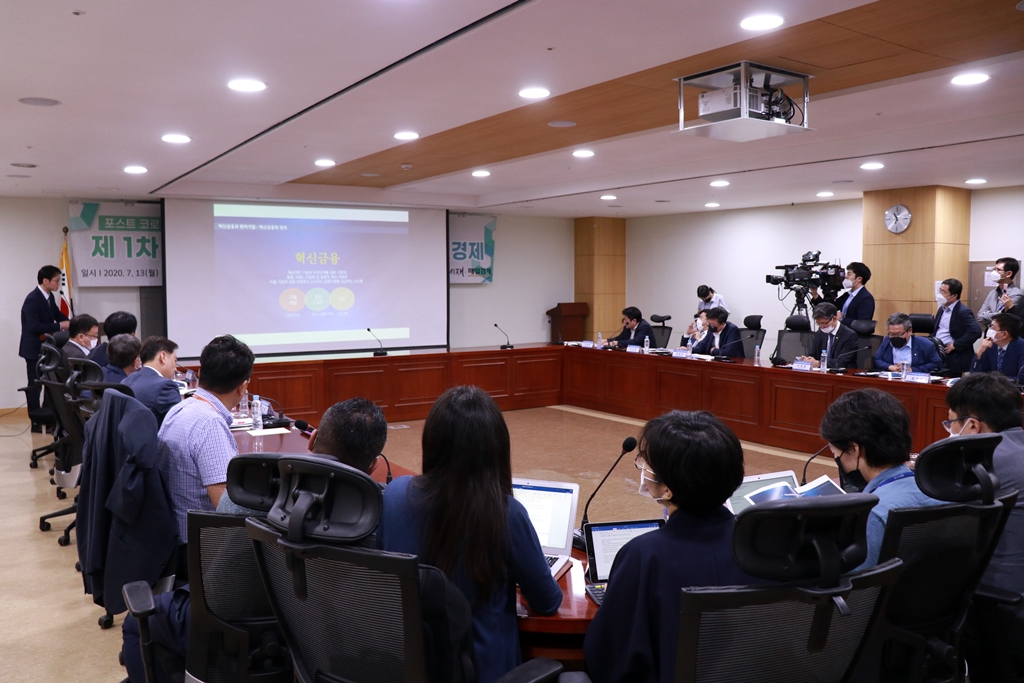 “A great reset is necessary to build a new social contract that honors the dignity of every human being.” -Klaus Schwab.

On July 13th, the Chairman of the World Economic Forum, Klaus Schwab, drew attention to the uncertainties of the pandemic age through his book titled “The Great Reset of COVID-19”. As the book’s title suggests, the world is now at a crossroads, not just in the realm of health and economy, but also in political systems and philosophies on life.

The Future Consensus Institute (Yeosijae) formed the COVID-19 Committee at the end of February, before WHO’s pandemic declaration on March 11th, to hold internal seminars on various aspects of the virus. To share the results of these seminars and to expand the discussion, we decided to hold a series of panel discussions on COVID-19 and the future of South Korea. On 13th, we partnered with the National Assembly Research Service (NARS) and Maeil Business News Korea to discuss digital transformation and innovation economy in the context of COVID-19 and Korea.

Hun-Jai Lee, the Chairman of Yeosijae, opened the session with his keynote speech, followed by an opening address by the Chief of NARS, Ha-Joong Kim. Congressman Gi-Hyoung Oh chaired the panel discussions, and the panelists for the debate were: Jin-Il Kim (Professor of Economics, Korea University), Won-Jae Lee (Head of Asia Pacific, Yozma Group), and Byoung-Jo Chun (Distinguished Fellow, Yeosijae).

This event was co-hosted by the Office of Lee Kwang-Jae and was attended by members of the National Assembly, including Congressman Jeong-Sik Cho, Eui-Dong Yu, and Jung-Hoon Cho.

The following text highlights the key points of the event. Senior Researcher Jang predicted a K-shaped model of recovery for the Post-COVID-19 economy, where the wealthy (composed of knowledge workers) experience a swift recovery, while the poor (comprised of small-scale business owners) see a slower growth, widening the gap between the haves and the have nots. In his presentation, he stressed the importance of supportive measures for low-income households that will suffer from the K-shaped recovery model and urged the government to utilize macroeconomic policies that will mitigate income inequality in Korea, unlike monetary and fiscal policies that have increased polarization in the past. He warned, “a delayed reaction to the crisis may turn the K-shaped recovery into a prolonged L-shaped recovery.”

Jang also argued, “we have to move away from monetary policies that gave priority to price stability, to focus on improving our economic system and increase the growth potential of South Korea.” He encouraged the central bank to become relevant on issues such as climate change, income inequality, and productivity. He also mentioned that aggressive fiscal policies in responding to COVID-19 have increased the national debt, and said, “we need to deliberate on this matter to find ways to increase tax revenues while mitigating burdens on individuals.”

Calling attention to the changing roles of monetary and fiscal policies, Jang underscored the importance of close coordination and cooperation between the policies and concluded his presentation by making two proposals. First, he suggested forming cooperative committees between monetary and fiscal authorities to hold working- and executive-level meetings on a regular basis. And finally, he proposed a standing committee between the Governor of Bank of Korea, the Minister of Finance, and the Chairman of the Financial Services Commission to bring monetary, fiscal, and financial authorities together to oversee macro-prudential policies in Korea. Panelist Jin-Il Kim agreed on the need for coordination in fiscal, monetary, and fiscal policies, but added that we need further elaborations on the guidelines that will outline the areas of cooperation and determine the types and urgency of different cooperation initiatives.

Professor Kim said, “There are three factors to consider in drafting economic policies: products (commodities and services), time (aspects that may change over time), and state (e.g., sale of umbrellas on days with and without rain). In our context, these factors are each the core components of fiscal, monetary, and financial policies respectively, and should be weighed differently in considerations.” For example, in times of crises like the COVID-19 pandemic, discussions on fiscal policies should determine whether the situation calls for exceptions in its policies. Monetary policies, on the other hand, require guidelines that will dictate the scale of currency issuance, and financial policies will need to address whether to increase the standards of financial soundness or not. He added that we also need swift actions to amend regulations on financial authorities, such as the Banking Act, and reform the governance structure.

2. Responding to the U.S.-China Tech War The event featured discussions on the macroeconomic challenges of COVID-19, along with an exchange of ideas on digital transformation as the economic growth engine for South Korea. Innovative finance and entrepreneurial ecosystem were especially highlighted during this part of the debate.

Byoung-Jo Chun, a Distinguished Fellow of Yeosijae, suggested using 'innovation economy' to turn South Korea into a digital economy powerhouse. He especially emphasized the importance of the U.S.-China struggle for technological hegemony, and called for measures to respond to its effects. He said, “Nations throughout the world have implemented measures, such as M&A barriers aimed to protect domestic IT businesses, to compete in the escalating competition for technological hegemony. The U.S. amended its laws on the Committee on Foreign Investment in the United States (CFIUS) to protect its critical technology, while the European Commission implemented stronger state aid controls on the acquisition of EU companies by foreign businesses. In this context, South Korea should also establish measures that safeguard businesses with critical technologies, including the buffers against the acquisition of Korean businesses by investors from competing nations.” NARS Legislative Investigator Su-Hwan Lee,
“We have to expand private investments in technology.”

Delivering a presentation on innovative finance, Su-Hwan Lee called for actions to encourage private participation in technology financing. Technology financing refers to the process of funding businesses through the qualitative or quantitative evaluations of their intangible assets—in other words, their technologies. Currently, much of technology financing is limited to funds that restrict companies’ financial autonomy, such as government investments and loans. Lee emphasized, “To resolve this issue, we have to expand private investments in technology to promote technology transfer platforms, and increase coordination of public-private platforms.” Yozma Group Asia Head Won-Jae Lee,
“It is time for South Korea to shift its focus
from scientific output to commercialization.”

Participating as a panelist for the discussion, Won-Jae Lee of the Yozma Group advised the South Korean government to refer to the startup ecosystem of Israel to leverage open innovation in the R&D sector and facilitate the commercialization of technologies. In the preliminary meeting for the panel discussions, Lee shared the words of Yigal Erlich, the Chairman of the Yozma Group, calling attention to the fact that the commercialization of technology in South Korea remains extremely low despite being one of the top constituents of Bloomberg’s Innovation Index.

He also touched on the news of an Israeli startup that recently completed the clinical trials for a one-minute COVID-19 breath test, crediting their success to open innovation that brought together experts from different fields. He argued, “It is time for South Korea to shift its focus from the scientific output aspect of R&D, to support commercialization instead.” Moreover, he added that accelerators would have to take on greater roles to assist the transition.

In the open debate that followed, the participants discussed potential areas of technological cooperation between South Korea and Israel. When Congressman Kwang-Jae Lee inquired about the areas of development for South Korean ventures, Lee replied, “We need to develop our technology commercialization capacity, by leveraging open innovation to create a pool of Korean technologies that can be used on testbeds. Technologies that have proven to be successful in the testbed can then be commercialized through the pivoting process.” He said, “Israel and the Silicon Valley, in particular, specialize in these pivoting procedures. Moreover, these regions have the first access to different technologies, and their swift M&A processes facilitate commercialization. Ventures in Korea, on the other hand, primarily focus on the domestic market.” He continued, “In this context, we need ventures in Korea to start targeting the global market from the initial stages of their development.”

This text was originally published on Yeosijae's Korean homepage on July 15th, 2020.